Ivory Coast is in Western Africa. Its southern shores are washed by the Gulf of Guinea and it has Liberia and Ghana on both sides
Ivory Coast is the leading producer of cocoa, used for making chocolates 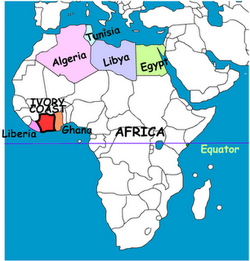 The erstwhile President, Laurent Gbagbo has been taken into custody and this paves the way for the internationally recognized President Alassane Outtara to assume office.