is a country on the east coast of Africa.
This part is also called the HORN OF AFRICA.
Indian Ocean is to its East, Ethiopia to its north , Kenya to its South and Gulf of Aden to its North. Its capital is Mogadishu.
The equator passes through Somalia. 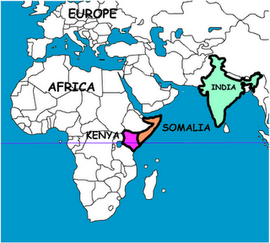 But this time the attack is in support of the Somalia Govt. Kenya invades Somalia to help Somalian Govt fight insurgent groups who are seen to be a threat to the entire region.

We must also remember that the North Eastern part of Somalia is called SOMALILAND and is one of the 10 partially recognized countries of the world.